Keeping a pulse on port volume trends is critical for business to gauge changing demand and to evaluate where goods should cross borders. Since ports are often a focus point of micro and macroeconomic changes, fluctuations in volume and commodities are a key indicator of industry developments.

In 2016, 20 ports handled 97 percent of U.S. ocean-going import volumes as measured in 20-foot equivalent units (TEUs), the standard measure for containerized cargo. In the last five years, many of these ports realized a 30 percent increase in import volume, compared with growth in U.S. imports overall, which have risen 18.6 percent since 2012. 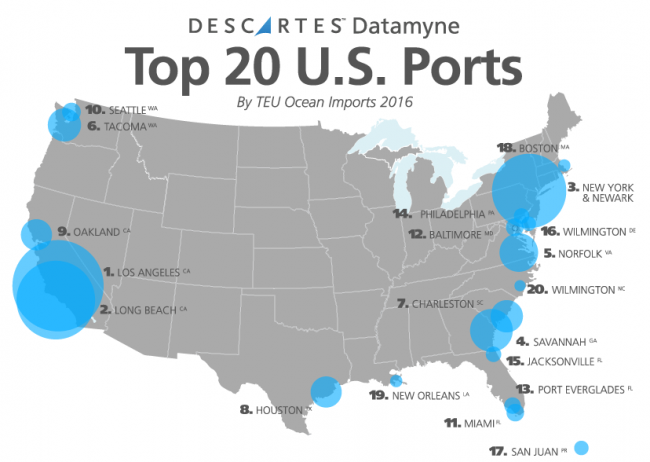 With fluctuating labor trends, larger ocean vessels and ever-changing logistics technology, the top U.S. ports have had to adapt to stay competitive and meet changing volume demands year over year.

The Panama Canal expansion has been a prime driver of infrastructure mega-investment. To prep for larger “post-Panamax” vessels calling on their docks, East Coast ports have launched billions of dollars’ worth of development projects. The $4.3 billion capital plan of the Port Authority of New York and New Jersey includes the addition of 64 feet of air draft to the Bayonne Bridge to open access to its Port Newark-Elizabeth terminal to Post-Panamax ships.

In 2015, the port of Miami completed an expansion of its Biscayne Bay and the Port of Miami Tunnel Project. By 2020, the Port of Savannah will have dredged the Savannah River to 47 feet at mean low water. With construction starting this year, the Port of Charleston also expects to deepen its harbor to 52 feet. 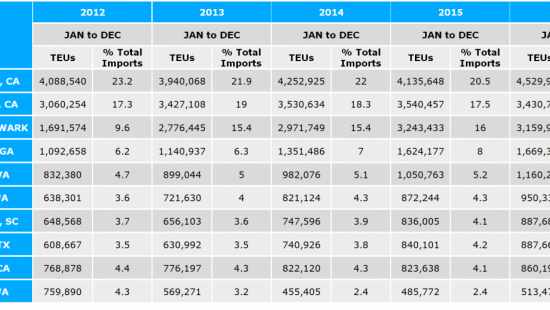 So far in 2017, import volume at the Port of Los Angeles has grown 5.2 percent compared with the same period in 2016. The Port of Savannah has seen continuous month-over-month growth vs. January-April 2016, with imports up 10.3 percent over the first four months of 2017. Notably, 18 of the top 20 U.S. ports increased in TEU import volume this April vs. April of last year. 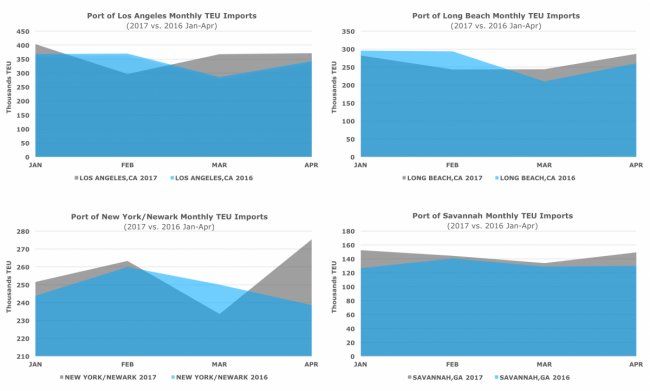