While December was the second consecutive month of declining container import volumes, it was still strong relative to previous years and especially pre-pandemic ones. Because the volume is still very high, port delays in many of the largest U.S. ports increased. The economics behind the high import volume continue to support strong demand for goods and the logistics services needed to move them. If strong demand for goods continues in 2022, there will not be a break from today’s frenetic pace. The January update of the logistics and economic metrics Descartes is tracking point to a sustained impact on global supply chains.

December was another record month for U.S. import volume.

While December was the second month in a row with declining container import volumes (see Figure 1), compared to December 2020 and pre-pandemic December 2019, it was still a record month with volumes up 1% and 25%, respectively. From a pattern perspective, the November/December decline is similar to 2019. Looking at year-over-year container import volumes, 2021 was 18% higher than 2020 and 22% higher than 2019. When considering the extent of the container import increase and the fact that higher volumes have persisted for 18 months, the chronic supply chain disruption (e.g., delays, variability, etc.) that has ensued should not be surprising.

Despite lower import volumes, port delay times continued to increase in December and the shift away from large West Coast ports is accelerating.

With decreasing container import volumes, the expectation would be that port delays would also contract. Instead, port delays are still worsening, according to Descartes Datamyne™ analysis. Delay times at the Port of Los Angeles increased in December to 15.1 days, which was almost back to August levels of 15.3 days. At the Port of Long Beach, the delay was even higher at 15.6 days. Equally, delays at the Port of New York/New Jersey also increased by almost a day to 11.7. The Port of Savannah was the only one of the top four ports by volume to see a decrease from 10.7 days in November to 9.9 days in December. This delay increase coincides with the number of ships waiting to enter the Ports of Los Angles and Long Beach which increased to another record level1. As of January 7, 2022, there were 105, up from 96 on December 1, 2021.

Inventory levels continue to run far below traditional ratios and events in 2022 could make it hard to improve them.

The inventory to sales ratio (see Figure 2) tracked by the U.S. Federal Reserve slightly declined again (1.1 in August and 1.09 in September, the latest update). This indicates that retailers have not been able to get beyond the peak season inventory demands in the second half of 2022. In addition, a number of events in 2022 conspire to make it hard for importers to elevate them in early to mid-2022. February could be a deceptively slow import month as the Chinese New Year (Feb. 1st) traditionally depresses imports. However, the Olympics (Feb. 4th – 20th) could further depress that month’s shipping volumes as the desire to reduce pollution, especially during the Olympics, could cause many parts of the Chinese economy to curtail operations2 before and during that time.

Product availability is still an issue as the inventory to sales ratio (see Figure 3) tracked by the U.S. Federal Reserve slightly declined again (1.1 in August, 1.09 in September, and 1.07 in October, the latest update). The October ratio is tied with April 2021 as the lowest ratio of retailer inventory to sales since the start of the pandemic. Even though many retailers started their inventory build earlier in the year to meet peak season demand, the declining ratio indicates either: 1) that retailers have not been able to make progress increasing stock in the second half of 2021 and are falling further behind; or 2) consumers started their holiday purchasing much earlier, consuming inventory at a faster than expected rate.

Personal expenditures on goods continues to be strong. This is one of the most significant drivers of high import volumes and the resulting global logistics challenges. While these expenditures as a ratio of goods to services declined slightly (0.4%), they increased by 0.1%, according to the latest FRED data (see Figure 4). With a strong economy and limited opportunities to spend their money on services (e.g., travel, restaurants and events), consumers are buying more durable and non-durable goods. The Delta and Omicron COVID-19 variants are continuing to depress consumer services expenditures and, without another avenue for consumers to spend their money, the demand for goods and related logistics services will likely not decline anytime soon.

Another indicator of a strong economy and continued high demand for goods is the Federal Reserve Unemployment Rate. The recent report (December) showed a continuing decline at 3.9%. By comparison, the unemployment rate just before the pandemic was down to 3.5%.

Global Shipping Crisis – Are We There Yet?

Why the Stuff Economy is Extending the Global Shipping Crisis

How Will We Be Able to Tell When the Global Shipping Crisis Ends?

Surviving Peak Season and Beyond: The Essential Guide to Supply Chain Resiliency 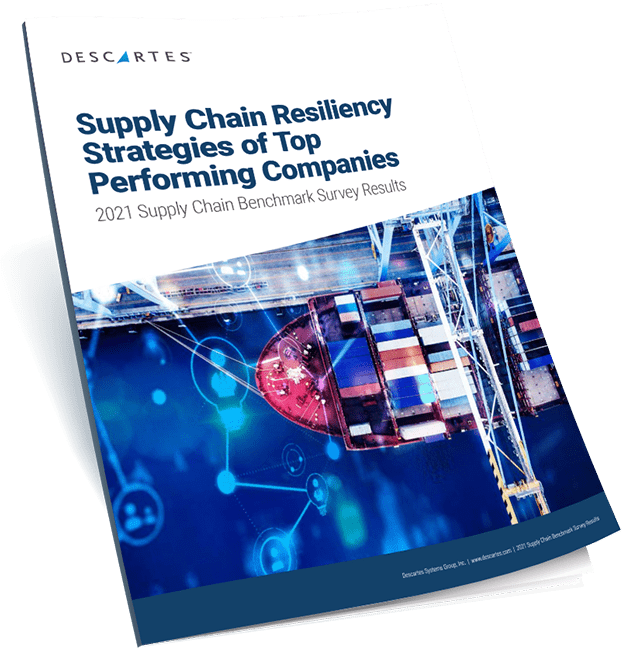 Get your copy of the survey results and find out key steps you can take to reduce risk and create a more resilient supply chain.

Omicron has quickly become the dominant variant worldwide, creating more supply chain capacity challenges and uncertainty. While it appears to be less lethal than previous variants, it spreads more quickly and has the ability to infect even those with two vaccinations and a booster. The result is that record numbers of workers are reporting not able to work and impacting supply chain capacity. It has also caused a reinstatement of many government mandates, some of which are so stringent they are stopping supply chain activity. For example, Cathay Pacific stopped flights to and from its Hong Kong home base.

As countries recover from COVID waves, they will be simultaneously catching up on previous export demand while trying to meet new demand. In some respects, these ups and downs will create a whiplash effect on global logistics. For example, according to Descartes Datamyne, U.S. import volumes from Vietnam were as high as 233,457 TEUs in May of 2021 before dropping to 131,716 TEUs in November due to a large COVID outbreak and the shuttering of factories and logistics operations. In December, U.S. imports from Vietnam increased by almost 20% (157,360 TEUs) and 2022 should see a significant increase as the backlog for products such as furniture where the country is a leading manufacturer starts to move again.

The big question on the minds of importers and LSPs is when, or if, a decline in import volume will occur in 2022. In addition, several significant one-time events could exacerbate the ability to move goods globally. Here’s what Descartes will be watching:

If consumer behavior in 2022 mirrors 2021, the demand for goods and the associated logistics services to get them to market will stay at elevated levels through 2022. Descartes will continue to highlight key Descartes Datamyne, U.S. government and industry data in coming months to provide insight into the global shipping crisis. Our current perspectives and recommendations are:

Our multinational trade data assets can be used to trace global supply chains and our bill-of-lading trade data – with cross-references to company profiles and customs information – can help businesses identify and qualify new sources. Ask us for a free, no obligation demonstration of our data on a product or trade commodity of your choosing – and keep the custom research we create with our compliments.

Talk to an Expert